Asthall Manor, overlooking the swans and stumpy willows of the Windrush Valley, dates from the early seventeenth century, but probably occupies a medieval site. Lady Joan Cornwall and her son Sir Edmund Cornwall are believed to have lived in it during the fourteenth century.

The present house – or an earlier version of it – was probably built for the Jones family, who occupied it until the 1670s or 1680s, followed by the Peacock family, and then, from the mid-eighteenth century and for much of the nineteenth, by the Bateman family.

The Manor was a convalescent home during the first world war, and in 1919 it was bought by Lord Redesdale, father of Nancy and the other Mitfords. It was on Asthall Manor, as well as the Redesdale’s’ other houses, that Nancy’s fictional Alconleigh is based. In 1926, the Manor was sold to the Hardcastle family, who retained it until 1997.

The present symmetrical appearance of the house has resulted from alterations made for the Batemans in the nineteenth century, and for Lord Redesdale in the 1920s. Lord Redesdale also converted the barn into a ballroom/library, with its huge bay window and Jacobean-style ceiling, and built the cloisters to connect this new ballroom and the rooms above it to the main house. The house was slightly reduced in size by the present owner in 1998-9.

A more extensive history of Asthall, written by R.B. Peberdy for the Victoria County History series, can be found here. 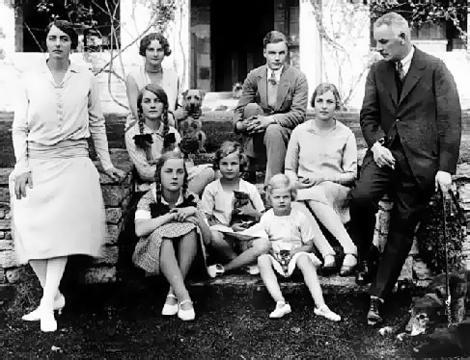 In 1919 Asthall Manor was bought by Lord Redesdale, father of the six Mitford sisters and their brother, Tom. The family spent seven memorable years of their childhood here, and the house was one of the models for Nancy Mitford’s fictional Alconleigh.

Lord Redesdale – or “Farve” as he was known by his children – only wanted the house as a temporary base while he built a modern house at South Lawn, Swinbrook, where the family moved in 1926.  But he took some trouble to make Asthall – which had been used as a convalescent home for wounded soldiers during the First World War – into a suitable base for his large family, by converting an old tithe barn next to the house into a glorious Arts & Crafts library and music room, with bedrooms above, and linking it to the main house with cloisters.

The older children – Nancy was 15 when they moved in and Diana 9, with Pamela and Tom in between – could escape from their parents, the servants and the younger children. In A Life of Contrasts Diana wrote, ‘This large room, furnished with hundreds of old books, a grand piano and sofas, with high windows looking south and east, was all the world to my brother Tom and me at Asthall. He played all day, Bach, Mozart, Brahms, and I lay on a sofa, reading and listening.” It is not entirely clear why or when this room became known as the Ballroom.

In the Footsteps of the Mitfords is a site specific theatre piece commissioned by Chipping Norton Theatre and written especially for performance around the Asthall Manor grounds by Scary Little Girls. O its most recent performance, in a socially distanced version in September 2020, Geoff Heath-Taylor in Tatler wrote Of course, while the actors embodied the spirits of the sisters magnificently, the play wouldn’t have been complete without its final character – the house itself.